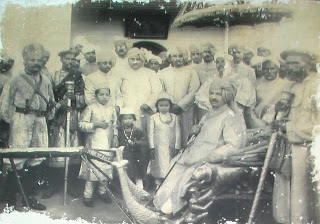 Nalki,is a sedan chair richly worked, and ornamented with gold, in which people of rank traveled so that theit feer did not touch the ground . It was one of the three great insignia (the nalki, the order of the Fish, fan of peacock's feathers) which the Mogul emperors of Delhi conferred upon independent princes of the first class, and could never be used by any person upon whom, or upon whose ancestors, they had not been so conferred.

References:
1. Hobson-Jobson: the Anglo-Indian dictionary By Henry Yule, Arthur Coke Burnell, 1886
2.Rambles and recollections of an Indian official, Volume 1 By Sir William Henry Sleeman, Vincent Arthur Smith, 1893
3. Wanderings of a pilgrim, in search of the picturesque, during four-and-twenty years in the East; with revelations of life in the Zenana , Fanny Parks, 1850
Posted by vaidurya pratap sahi at 8:15 AM