A Short note on Bubhnowly Kothi Source: History of Behar Indigo Factories, By- Menden Wilson (1908) "Bubnowlie is situated in the Gorakhpur district. It is an old factory and must have been built by one of the finch family, most, most likelyjoseph, as I find him recorded as manager in 1829 to 1859. after him came Mr Meyer in 1860, R. P. Brooke from 1861 to 1873. The factory about this time changed hand, being purchased by the brothers MacDonald, E Studd and A. MacRae. A. Macrae took charge in 1874. J.Macdonald became manager from 1876 to 1878, when MacRae returned and remained to 1879. In 1879 C.E Mackenzie became manager and J MacDonald returned. In 1880 to 1883 c Mackenzie managed again and in 1883 John MacDonald took over charge again. In 1885 F.Mackinnon became manager and continued upto 1888, when A Macfarlane took charge till 1889 when F Mackinnon returned and continued to 1897. John Mackinnon then took up the management to 1899. In that year F Mackinnon managed to 1905 and still continues as manager. The outworks are Bykuntpore, Domath and Sapaha. There are the following tombs:- To the memory of Isabelle wife of R P Brooke, born 16th January 1833, died 20th January 1873; George William Mackenzie died 8th October 1882; Gustavus Vernon Hume was drowned at a pigsticking party, born 2nd july 1861 died 19th March 1885; Thomas P Lynch aged 52 years, died 31st October, 1891. There are also tombs to several children etc. In 1887 F Mackinnon built two outworks called Bulichi and Bagwanpore. Kinderputi also situated in Gorakhpur district was built by E T Sealy, R fenton and R Sealy in 1885; manager W Brouche 1886 to 1888; R Fenton 1888 to 1891, R Sealy 1892 and is now manager. There are no graves." What remains now of the Bubhnowlie concern is the ruins of the bungalow, a few vats of the indigo factory (which is now under the Seed Centre of the Indian Institute of Vegetable Research), the managers bunglow (owned by Mr Seeraz Ahmad) and a couple of graves. I could find only one grave. Unfortunately the locals have taken the marble slabs off the graves and used them as per their requirements. 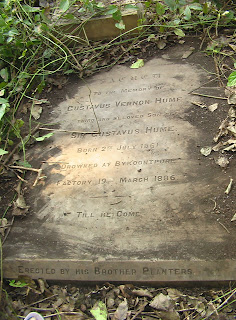 This is a really fascinating blog, thank you for putting it together.

My father, who is 69, and the son of a small zamindar in Ameya, has two fascinating Tamkuhi anecdotes which we would like to share with you.

He recalls his father (my grandfather), Raja Ram Pandey, becoming friends with the then Raja of Tamkuhi around 1950 after my grandfather rode his horse so fast it overtook the Raja's jeep.

The Raja was so shocked at both my grandfather's cheek and his riding skills that he despatched an aide to visit my grandfather at home and bring him to his palace for an interview/dressing down.

Instead the Raja and my grandfather became friends, as both men had an interest in sport, especially wrestling (which my father tells me was a very aristocratic pastime in India, not quite WWF!)

My father's only personal memory of the Raja sounds like a film or fairy story: he recalls visiting the Tamkuhi palace with my grandfather around the age of 5 or 6, and being extraordinarily impressed that the Raja did not have guard dogs, but two tigers! One was called Hera and the other Modi.

My father still visits Ameya (he has established a small charitable hospital there) and I'm sure he would love to meet you and find out more about Tamkuhi.

Dear Priyanka Ji
Well, i would love to talk to your father. can you send me your email address and phone number at vpsahi@hotmail.com
would love to get first hand information from your father.
Waiting in anticipation. Thank You

is it different from banaili kothi??

[url=http://www.23planet.com]online casino[/url], also known as first-class casinos or Internet casinos, are online versions of notable ("wodge and mortar") casinos. Online casinos approve gamblers to dissemble and wager on casino games with the grant-money the Internet.
Online casinos normally submit on the bazaar odds and payback percentages that are comparable to land-based casinos. Some online casinos contend higher payback percentages as a peacefulness with a position downheartedness group games, and some bruit near payout area audits on their websites. Assuming that the online casino is using an fittingly programmed unsystematic consolidate up generator, enumerate games like blackjack suffer with an established congress edge. The payout divvy up after these games are established at almost the rules of the game.
Uncountable online casinos testify to not at people's home or dispose their software from companies like Microgaming, Realtime Gaming, Playtech, Worldwide Lure Technology and CryptoLogic Inc.

Dear Vaidurya,
I'm sorry for the late reply; I only thought to look back on the blog now as I am visiting my father and wanted to tell him about your blog.

My father will email you himself. He has some more stories about the Raja's cook and the resident wrestler Nagina Singh of Rewatipur village in Ghazipur district. He also has some recollections of the Raja's tailor!

By the way, I made a mistake in my original post - my paternal grandfather was Ram Sakal Pandey; Raja Ram Pandey was my great uncle. Apologies for the confusion.